Interlude: The Metsiness of Picking our Heroes 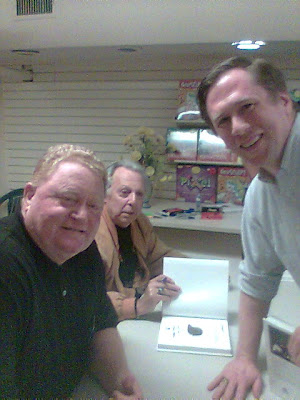 That's Rusty Staub, Phil Pepe, and me. I'm the one who doesn't look like he's been part of professional sports for forty years.

For those of us who were Mets fans in the 70s, it's sort of a credentialing process to list all the horribly lopsided trades that define the beginning of the dozen years of downtime that ended only as the bad boys of the 1986 World Champion team began to arrive. I did eventually adopt Steve Henderson's batting stance in pepper games, though I never stopped rooting for Tom Seaver, even against my Mets. But I never warmed up to Mickey Lolich. No, he didn't pitch all that badly in the hour-and-a-half he was a Met, but he came in exchange for Rusty Staub.

I can't tell you exactly why, but I've always been partial to The Big Orange. I think it's because he was a very good player at a time very good players were understood to make a difference in team's fortunes. We're completely star-driven in sports today. I don't know that a Rusty Staub would receive the same respect in today's baseball.

My favorite story of my own rooting for Rusty Staub was very late in his career, in a long (16-inning?) game, when he was pressed into service as an outfielder (once a good defensive RF, Staub was at this point a pinch-hitter and occasional 1B). With no one left on the bench, the Mets switching positions after every batter to keep Rusty and his limited range in whichever outfield position was less likely to be hit to. Naturally, therefore, Rusty got to make great catch* late in the game - which the Mets did, of course, win. Everybody in my dorm who had their windows or dorms open that afternoon knew something great must have happened somewhere when Rusty caught that ball. There's a reprint of a columnists' take on that game here.

Another reason I'm a fan of Staub's is that he became what his teams needed when they needed it. When he came back to the mets for the end of his career, he made himself a premier pinch-hitter and mentor. I wouldn't mind if I could look back over my career - as an engineer, a husband, a project manager, a father - and have someone say about me that I became what I needed to be when it was needed.

Who knows exactly why our heroes are our heroes? For whatever it means, Rusty Staub is one of mine.

Which is why I've gotten so adrenalized and tongue-tied the two times I've met him that I could barely speak... but that's a story for a different time.

* - I imagine it was great - all the reports at the time seemed to think that, but I was listening on the radio.
Posted by David Vincenti at 12:15 PM No comments:

"I regard myself as a beautiful musical instrument, and my role is to contribute that instrument to scripts worthy of it," [Ed Asner] says, sounding -- briefly -- almost peaceful. "And hopefully the music we play will be about decent human beings fighting against disease, fighting against corruption, fighting for the truth. and fighting for a day when all our jails are empty, and all our schools are full."

From an interview with Stephen Whitty. Whitty is one of four reasons I continue to receive the Star-Ledger at my house. I know I could read it online; that's OK for the dailies, but for Sunday features, there's nothing like newspaper. Even without James Brady.

(PS: Yes, I think Asner's loopy in real life. Yes, I think he's right about his art.)
Posted by David Vincenti at 1:59 PM No comments:

Ugh. Terrible how life sometimes chooses to remind us that it is in charge. My streak of 6 weeks of 3+ posts per week came to a crashing halt in May. I could have predicted it, could have warned of it in this space but I remained optimistic.

News from around this vicinity:

Let's see if I can get back here before the end of the month with at least a few of the bullets my internal editor got to before I could post them. Early line in Vegas is 12:5 against.

Posted by David Vincenti at 9:42 PM No comments:

Some Stuff I Thought About Once

Among the incompletenesses I've accumulated over the past few years:

Of course, the single obvious conclusions from this mishmosh is...

Posted by David Vincenti at 5:13 PM No comments:

Boldly Go to the Cosmetics Counter

Have you seen the new Star Trek colognes?

Yes I want some.

No I don't care what it says about me.

Seriously, how can you not want a cologne called "Red Shirt" with the tagline, "Because tomorrow may never come."?

Confidential to Staten Island: Thanks for the tip. It'll be 29 years in September.
Posted by David Vincenti at 8:48 AM No comments:

A From-the-Public Service Announcement on the NJ Gubernatorial

I know I don't usually get political here, but.....

Dear Competing Candidates: I will be voting in the NJ Republican gubernatorial primary. I have been attempting to sort through your respective credentials as available in the objective data of the public record so as to make an intelligent choice, representing the best potential for New Jersey.

As of this moment, I have decided that the next one of you whose auto-dialing computers leaves a prerecorded three-minute diatribe about the other's shortcomings will officially be scratched from any future consideration on my part.

Should the other of you follow up with a message of similar slant at any time between now and the primary, you will also be scratched from my personal slate.

Please provide me with evidence of your qualifications. And let me decide. And be quiet until the debate. Please?
Posted by David Vincenti at 7:00 PM No comments:

A Public Service Announcement on the H1N1

There are some scary elements of the current H1N1 virus scare. To take your mind off them, check out an engineer's take, and a preview of Alert Level 11. And if you live in the US and want to know what's really going on, there's really only one reliable source. Promise me you won't watch the 11-o'clock news for your H1N1 udpate. Please? Promise me?
Posted by David Vincenti at 9:18 PM No comments:

Got to 12 posts in April. That's not bad. I wanted to reach my best best monthly total ever (14), and I even had three posts worked up that are still sitting in Drafts, but I didn't want to lower my already-low standards just to hit the number. But I'm spending more time with the words than I have the past year. That's good.

Want to have some fun? Try to borrow a supermarket hand-basket for a couple of days. Convince the store manager you're serious. What a great way to spend a Friday evening. Aside: Kudos to store managers like the one at my local Kings who actually took me seriously and tried to, creatively, help me out. Ultimately he couldn't help let me borrow one when I asked because his inventory was too low - because too many people take them without asking. And people wonder why my indignation levels are high sometimes: Nothing punishes you like following the rules when the rules are not generally followed.

Why did I need a handbasket? As a prop for this, of course.

Many NatPoWriMo participants are in the process of weeding their 30 drafts to the useful few. I didn't write daily in April (and won't in May - such is the schedule), but I completed 3 drafts over the past month, one of which has already been read aloud to strangers. So I got that going for me.

FYI, Maybin = Cameron Maybin, my Fantasy Baseball team's future starting CF. If he could just get his Ks down under 3 a game.....
Posted by David Vincenti at 8:11 AM No comments: