Resolution: Be a poet.

Before the sadly-no-longer-ageless Dick Clark takes custody of my television and I set my alarm for 11:40 so I can be awake for the annual commemoration, it seems appropriate to take a minute to think upon the year ending this evening.

In terms of my own writing, this was the year I finally pulled the trigger on my chapbook. Is there anything to add to that? The first time I submitted it was a little over 6 years before it finally saw the printer. It was a full-length manuscript then; it contained 55 poems of which about 18 survived the revision and resubmission process into the final cut. Into the mix were folded silent rejections, quiet encouragement, generous advice, familial patience, and finally, sufficient prodding. With a little help from a great designer, the thing in my head finally became a thing in my hand.

The first public viewing of the final product was in July. There, and in the couple of times since that I've taken it to the podium, I've been a little surprised at the positive reception; don't know why, except that having labored on it for so long, I'm fearful about the value of that labor.

And then earlier this month I receive an email from a poet of some renown, all of whose books are on my shelf, someone I've spent more than a little effort emulating, saying he wanted to get a copy of the book. I read the email to my wife. Twice.

And then, a poem from the book appeared at Your Daily Poem, and comments about the poem showed up in my box and on the poems' YDP page. A request to reprint. Invitation to promote the book. Hmm.

I've always felt blessed that so many terrific poets have let me run in their company over the years, and yet always been a little (OK, more than a little) self-conscious to have them introduce me as "also a poet" to their friends. I'm an engineer. A father. An educator. Sure, I write, but that's not what I really am, is it?

Kelli Agodon reprinted this week a list of common traits of successful artists. Her post is worth reading, and the primary trait was that art is the core of their lives. I have never really accepted that about myself. But as Kelli says, "you want to be known as a writer, not someone people run away from because they see your book peeking out of your shirt pocket."

Whatever else I might think, I realize that statement is true for me.

So here's my resolution for the year. I'm going to stop avoiding the word "poet" when I'm chatting with people, especially ones I'm just getting to know. I'm going to talk about the book like I'm proud of it, which I am. I'm going to be a poet when I'm working, when I'm bowling, and when I'm picking up the groceries. With my kids and with my mother. Watching football. And when I'm writing. Which I will do - because that's what I do.

Yeah, I'll waive my hands at losing weight and organizing my closets and not procrastinating, but this is my for-real and for-true resolution: I will be a poet.

Shouldn't be so hard, should it?

Happy New Year. See you back here in January.
Posted by David Vincenti at 7:21 PM 1 comment:

If it is true that we write to find out what is on our minds, it's pretty clear where my head has been at this month. 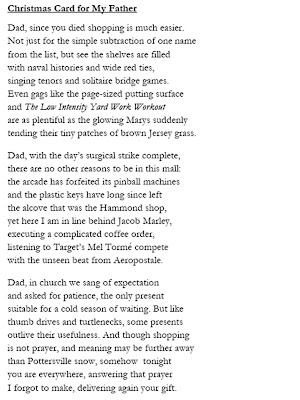 Of Readings and Readings

What makes a good poetry reading? I heard two rules suggested in my visit to the Wednesday Night Poetry Series last week: A crowd that listens and asks good questions, and an open in which everyone participates. I'll add a qualifer to the second: an open in which everyone who participates does so without self-promotion. I don't think it's necessary everyone in attendance read (in fact, I frequently repeat the line that great writing requires great audiences, too, not just other poets waiting for their turn at the microphone). But the WNPS crowd is genuinely a great audience - in the open presenting their own work, readings of classic poems, discoveries from newly uncovered books, etc. and paying such close attention to my invited reading that they were able to teach me something about my own presentation, noticing the musical modes I prefer and making observations about my delivery that surprised me. A great time.

And Sunday in Hoboken, my small but dedicated band of regulars gave a DeBaun and Symposia welcome to Joe Traum, who gave us the gift of some insight into his writing and editing process, as well as some entertaining excerpts from Waking Up. We don't turn out people by the dozen, but our audience contains some great listeners and the ends of our features almost always turn into Q&A.

Which, by the way, is a planned and eagerly anticipated part of the WNPS series, as well. There's something to this.....
Posted by David Vincenti at 1:49 AM No comments:

It's a nice windy day in Hoboken, perfect for stopping in out of the Washington Street wind tunnel to hear Novelist Joe Traum read from his new book "Waking Up". We'll see you there!
Posted by David Vincenti at 10:50 AM No comments: