If you're a fan at my Facebook page, you probably thought I was nuts this morning when you saw:

David Vincenti Analogy for the day: Curling is to The Olympics as Poetry is to Barnes and Noble. Discuss.

Jayne Jaudon Ferrer of Your Daily Poem was first to fire a salvo back, repeated here in its entirety: "I think not! Poetry is vibrant, exciting, funny, heartbreaking, provocative, whimsical, keep inserting other descriptive terms. Curling is BOOOOOOOOOOOOOOOOOOORING.."

Well, friend Jayne, I couldn't have asked you to set me up any better. (I'd insert the obvious volleyball reference here, but that would be mixing metaphports).

My proposal is that poets adopt curling as our official winter Olympic sport, and see in that fine old game a series of similarities to our selected art that might just teach us a thing or three.

First: Curling has historical roots that most people who dismiss the sport don't know. While these don't necessarily make the modern version of the game easier to understand, they do provide some context, not to mention some interesting stories that might help you connect to the game as you play it or watch it. Poetry, similarly has history that most people who dismiss it put out of their heads the day after they learned them in high school. While this history doesn't necessarily make contemporary, modern or post-avant poetry easier to understand, it certainly contains interesting characters and many ways connect to poetry as you read it, write it or listen to it.

Second: Curling, while it looks easy to do (at least to those who don't participate in game) and is tempting to treat lightly because of that, does have some subtlety to it, some rules which - if you exploit them well - make the difference between being a champion and missing the medal round. Face it: Even if you don't see it, there's got to be some skill involved, or teams which are consistently good wouldn't beat up so regularly on the teams that are consistently bad. In the same way, poetry seems easy to do (at least to those who don't participate in the art). And while many people could talk about rhyme and tap some iambs out on the table, few outside "the game" could speak usefully about assonance, enjambment, allusion.... which will lead us, inevitably, to lash out at those who dismiss us with a similar challenge: they might not see it, but there is clearly a practitioner's skill involved, else those who publish and present and are read more widely wouldn't consistently outpublish (etc.) the others.

Third (Sorry, Jayne, this one's right back at you!): Curling is Boring. Ask anyone in your office about poetry. I disagree on both fronts, but don't for a minute tell me that a significant fraction of your coworkers would say poetry was exciting.

Now how about this one: Curling unfolds slowly, tactically but its the rapid twists at the end that provide the hook, the reason to keep watching. Poetry, similarly, unfolds according to its own tactics, but frequently brings a surprise at the end that makes the unfolding all the more interesting in review.

Or this: the basics of curling, the steps in execution, are learned fairly easily. Their mastery, which is much more mental than physical, comes only with practice and wisdom, explaining why curlers are typically older when they reach their peak than are other athletes. Isn't that really true of poets as well? I mean, in what other arenas does "Younger" mean "Under 35?"

In case you hadn't guessed, I've been watching a bit of curling and yes, as I get to understand it a bit better, I'm really finding it interesting. Not for everyone maybe; I think my wife is convinced I've gone a bit loopy to be so fascinated by it. As to whether that is another way curling is like poetry, I'll have to withhold comment. 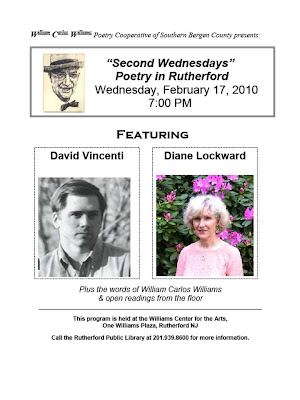 Come join us if you can!

Posted by David Vincenti at 8:35 PM No comments:

If you are one of my six loyal followers, or for that matter anyone who's wandered into earshot during the first half of February over the past few years, you've heard of how the tradition in our house is KFC on Valentine's Day (the full story is in the archive). Here's a little update of that story, in honor of the day, and of my kids, who to my great joy, have begun to revel in the quirkiness of our celebrations as much as I.

May you spend the day with ones who bring you as much joy.

{sorry, this poem has been deleted}
Posted by David Vincenti at 2:22 AM No comments:

I don't know if he agrees with his politics, but my Uncle Bill and his quartet stopped by to offer former President Bill Clinton a song and some advice upon his release from the hospital:

{this obsolete link has been deleted}
Posted by David Vincenti at 12:40 AM No comments:

A Roux, A Reduction, The Essence (if you will)

A great event last night at Gary's Wine & Marketplace in Wayne. Maria Gillan and Laura Boss were featured, introduced by Jim Gwyn in an event organized partly by Jim and Emily Rose of Lips Magazine. Maria and Laura are simply great, entertaining poets who radiate joy for the art, and they attracted a great crowd of poets and fans of poetry. Oh, and the four wines Gary's staff were pouring next to the yard-wide cheese plate didn't chase anyone away, either.

The open was a good ride. A long list of good local writers presented (Jim Gwyn, Jessica DeKoninck, Betty Marchitti, Norma Bernstock, Catherine Magia, and I'm sure I'm forgetting several) along with at least one first-time-ever reader, a member of the store staff with a great set of pipes who I hope enjoyed his experience enough to try his chances again at the next poetry event at Gary's (hint, hint).

After the event, Tony Puma of the WCWilliams Poetry Cooperative (which has graciously rescheduled my snowed-out reading with Diane Lockward for next Wednesday...) commented on the short poem I presented that it was "tight", that it seemed to contain what it needed to and no more. High praise, indeed; I don't know what I could have heard that I'd have taken as a better compliment. That got me thinking about how I sorted out my portfolio last year, removing a substantial fraction of works I thought qualified as "done", but that were somehow not up to the level of my other work. While it breaks down fairly chronologically (the older work is the weaker work - not unexpected), the real difference is the "tightness", the absence of unnecessary words. When I've received the gift of feedback on my work in the past year, that's one of the themes that's been consistent in that feedback, and that's what drove me to sort and select the poems that I'll be including in the chapbook.

And there's another element to what got included which actually cause me to sort out at least one piece that I think is stronger than most of the poems I left in. Which links me to this week's other learning.

Hoboken, NJ: For the fifth installment of the 2009–2010 Spoken Word Series, DeBaun Center for Performing Arts and curator David Vincenti have chosen a well-published artist to be featured on Sunday, February 7, 2010, at 3 p.m.—Farrah Field. The Spoken Word Series, co-hosted by Siobhan Barry-Bratcher and David Vincenti, is presented monthly at Symposia Bookstore, 510 Washington St., Hoboken, NJ.

Farrah will read from her works and then the microphone will be open to the public to share their work. Although it is not necessary to pre-register to attend the event, those interested in sharing their work during the open mic are asked to sign up at 2:45 p.m. Open mic participants are asked to limit their work to five minutes per person.

The Spoken Word Series takes place at Symposia Bookstore, 510 Washington St., Hoboken, NJ. Symposia is the only used bookstore in Hoboken and has great prices for used books, wireless Internet access and many events every week. This is the sixth year DeBaun Center for the Performing Arts and Symposia Bookstore have teamed up to co-produce the Series. With each reading, more and more people are introduced to this wonderful bookshop and the work of many superb artists.

Posted by David Vincenti at 10:34 AM No comments: