"...We’ve thrown in rain,
we’ve thrown in darkness, once in March we
put on gloves under our gloves and threw in snow
and always to the soundtrack of our conversation,
a father and son’s seeds for a garden of love
I pray will bloom all seasons. ..."

From Ed Romond's Bald Spots, up today at YDP.

The thing that strikes me most today is how different my relationship with my kids is than the one I had with my father. That's partly a function of our respective generations, of course, but also a function of those unexplainable differences that make us all different. My father and I played a lot of baseball together when I was younger - a lot of golf when I was older - and it's not like I played those games reluctantly. But I was always aware that I was not driven the same way he was. I was always a little more joyful in the doing, a little less interested in the level of the achievement (after a point, that is - like him, I've always had the desire to do well anything I cared enough about to do at all).

Looking back at the defining moment in our relationship - the day I brought back to my parents' house a new car I had selected and paid for without their help - and how different our times together were after that, I begin to realize he was always pushing me to be "good enough". We may have had different definitions of that, but I see now that once he was convinced I would neither starve to death nor go bankrupt outside his care, all the (occasional) tension between us fell pretty much away.

Now, I know it's not that simple. Nothing is ever that simple, and the frosted lens of memory covers over many details that would complicate my conclusion. But the thought reminds me today of the father I want to be - the kind whose children are happy in the doing, who are able to do what they choose to do as well as they choose to do it, who are safe and know how to stay so, and who are able to find joy in their decisions. Baseball's not part of our repertoire; we're more likely to sit down at the piano together than go outside to play ball, but it's not really all that different than the way Ed sees things when he's with his son. It's just that our misunderstood imperfections are broken keys - "no music" spots, maybe - instead of the patches in Ed's lawn.

Here, by the way, are three things I think all fathers should share with their kids on Father's Day:

A Happy Fathers' Day to my many role models in the job.

Posted by David Vincenti at 12:36 PM No comments:

Kibble (the stuff that's not quite up to "Bits" standards)

Wouldn't it make more sense for Mothers' Day to be coincident with the end of the (grammar) school year? As much as I think of myself as an involved and enlightened father, it seems sensible to celebrate mothers at the same time the day-to-day schlepping of the a school year hits a little bit of a lull.

At YDP, Jayne Jaudon Ferrer has been celebrating fathers this week. As always, her selections span from contemporary to classic, and the idea that we have been exploring our relationships with our fathers for hundreds of years is somehow comforting to me.

Jayne posted this week one of my favorite father-themed poems by I writer I am getting to know better this year. Go read Gregory Orr's "Father's Song" and, if you've been around these parts for long, you'll quickly see that it's the kind of poem I frequently aspire to write.

Today's poem, by the way, is by Jerseyan and literarymama columnist Ona Gritz; her work is always worth a visit.

I hereby concede to the spammenters. Comment moderation is now turned on here. I get so few comments, it's not a big deal, but it is ridiculous.

And yes, I will continue to prevent anything I find offensive from appearing in the comments section (though now proactively instead of through deletion. My mother visits here, after all.

Ron Silliman was in Poetry in June. He was last in that august periodical in 1969. I think that says something, but I'm not sure exactly what.

The issue in which he appears has letters on both sides of a "controversy" regarding the value, or maybe the appropriateness, of having poets explain their work. This may be particularly meaningful in an issue in which Silliman appears, given his ongoing position that most poets put so little effort into the craft that there is no "other layer" to the work - that most things people call "poems" today are at best interrupted prose in consideration of sitcom-quality topics (all of that is in my words, by the way, not his...). And I know that even I, whose work is not nearly as many-layered or allusive as that of the great poets I follow, grow weary of people stopping in the middle of a poem to ask "what does it mean?" However, I find the vehemency of some poets' opposition to explanation just as wearying. If we want to grow poetry's audience, we need to provide some opportunity for people to latch onto it. And once latched on, the explanations are irrelevant. Explanations are like the instructions to a great board game like History of the World. We cling to the directions when we're learning, but once we are proficient we leave them in the box and just play.

Why is this such a problem for some poets?

Quote today on iGoogle: "Rational arguments don't usually work on religious people. Otherwise, there wouldn't be religious people." (it's attributed to Doris Egan, but I don't know if it's her or one of her characters speaking). Now, as a daily practitioner both of my Roman Catholic faith and my technology career, I think this is selling people of faith a bit short, but that's for another forum. What's interesting to me is that you could substitute just about any subject about which people feel passionately for the religious connotation in this statement. For example, could you imagine hearing "Rational arguments about poetry don't usually work on poets. Otherwise, there wouldn't be poets."? Or soccer fans? Are annoyed with sportscasters feeling obliged to tell us how they don't like soccer everyday during the World Cup? I don't care if you like soccer (I'm not a fan, really, either), but don't disparage people who do. Likewise poetry.

And in case I don't get back to you, Happy Father's Day!

Posted by David Vincenti at 10:53 AM No comments:

Draft: One For My Father

Discussing the object of our respective writings, a poet friend recently asked me if I'd written much about my own father, wondering if exploring that relationship was somehow evolving parallel with my exploration of the relationships I'm seeking with my own children. I realized, and said in response, that I'd done quite a bit of writing when he died - going on 10 years ago, now - but much recently. Not long after, I had a nice long car ride in which to think about that. And this is the season for me to think about time: his birthday (he'd have been 69 this month) and Father's Day are close enough together to concentrate my energy on on his memory for a while, and it's about this time every year that I realize that I am more like him than I am like any other person - and I understand him a little better each time I reach that realization.

Of course, he'd slap me senseless for going on like this. He believed firmly that thinking of those who have gone ahead was akin to shouting down a well - might get some words out of your system, but you're not doing anyone else any good.

I disagree. But I'm also OK with that if it's true. Here's one for my dad. 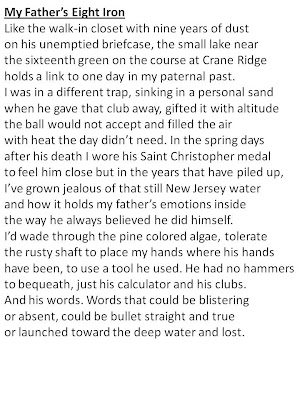 Posted by David Vincenti at 9:13 PM No comments: